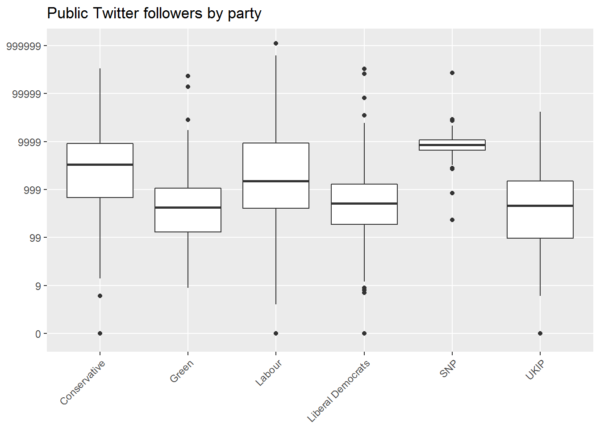 The above is a boxplot. If you’re not familiar with this way of visualising distributions, the most important thing to know is that the thick horizontal lines show the median numbers of followers for candidates of each party while the boxes show the ranges within which the bulk of candidates fell and the dots show the outliers (there’s Corbyn, right at the top with over a million followers).

The boxplot shows that Green, Liberal Democrat, and UKIP candidates tended to have very similar (and relatively low) numbers of public followers, while candidates for the Labour Party, the Conservative Party, and the SNP all tended to have higher numbers. The SNP has the narrowest range and the highest median of any party and the Labour Party has the widest range of any party and a median that’s higher than that for the Greens, the Liberal Democrats, and UKIP, but lower than that for the SNP and the Conservatives.

Did the SNP win the ‘Twitter election’, then? Not necessarily. For one thing, its high outliers all fall within the ordinary range for Labour and Conservative candidates and therefore would not have been outliers had they stood for either of those parties. For another, there’s a factor that may explain the SNP’s high median: there were very few SNP candidates overall (because the party only fielded candidates in Scotland), with a very high proportion of them having had a high public profile due to having sat in the House of Commons already (because the 2015 General Election in Scotland was an SNP landslide).

So let’s look at the effects of party, controlling for whether or not a candidate had previously been an MP and focusing only on Conservative, Labour, and SNP candidates (with Conservatives treated as the baseline):

The above tells us that the party a candidate was standing for and whether the candidate had been an MP in the past both have a statistically significant relationship with the size of the candidate’s pre-election public Twitter following. The relationship between having been an MP and having a large following is stronger and more statistically significant than the relationship between party membership and following size. The SNP may have had a social media advantage over Labour and the Tories that is not explicable purely by reference to the proportion of its candidates who had sat in the Commons before, but because it’s only statistically signicant at a low level (p < 0.1), we can’t rule out the possibility that this may have been a fluke — while Labour appears to have had a smaller but very statistically significant social media advantage over the Tories (p < 0.01). This is the opposite of what we might have expected from the above boxplot. (A good example of why analysis cannot stop with visualisation. Sorry! The actual numbers are important.)

So it seems that — when it comes to its rivalry with the Tories — Labour won the Twitter election after all.1