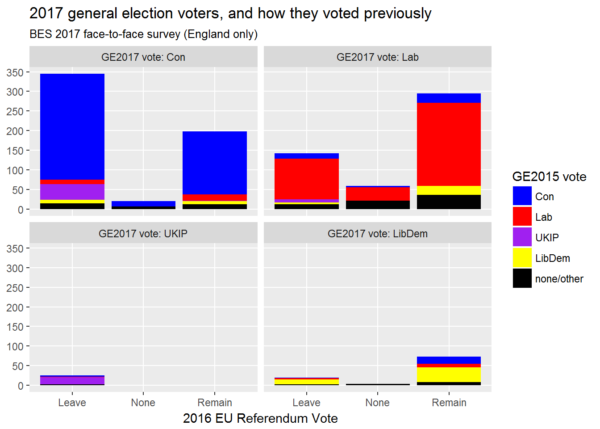 What does this chart tell us? It tells us that, at least within this random sample of 1874 voters (1777 after weighting)…

To summarise: on the evidence of these data, the only really notable movement among Leavers seems to have been the metamorphosis of most 2015 UKIP voters into 2017 Conservative voters. Those voters are unlikely to go back to UKIP because, on the brink of financial ruin and with no credible leadership, UKIP is in no position to win them back. Otherwise, the movement that has taken place appears to have been largely among Remain voters: more Remainers than Leavers would seem to have gone in both directions between Labour and the Conservatives and between Labour and the Liberal Democrats, while the Liberal Democrats picked up a not inconsiderable number of formerly Conservative Remainers and while a larger block of Remain voters who had not voted for any of the four main parties in 2015 simultaneously fell into orbit around Labour.