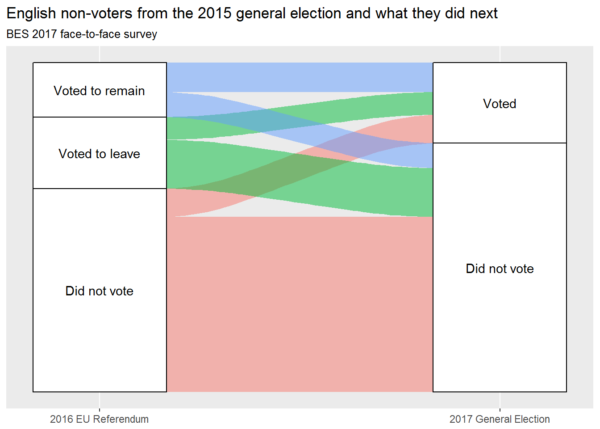 Here’s an interesting point, though. The majority of those GE2015 non-voters in the sample who did vote in the 2016 referendum voted Leave, and the majority of those who voted Leave did not vote in GE2017. But the Remain-voting minority bucked the overall trend. Of the mere 48 GE2015 non-voters in the sample who voted Remain in the 2016 referendum, 26 went on to vote in the next general election, while of the 179 who did not vote in the referendum, just 25 went on to do the same.

What are we to make of this?

Now for the statistic that many of you will have been waiting for. Of the 24% of GE2015 non-voters in the sample who did vote in the 2017 general election, a remarkable 61% voted Labour. But here’s the rub: that’s 61% of 24% of 15%, which means that we’re only talking about 41 actual people out of a sample of 1874. And this has to be seen in context of an overall picture that reveals losses to non-voting as well as gains from it. In 2017, Labour picked up 41 members of the sample who hadn’t voted in 2015, but 55 of its GE2015 voters from the same sample went the other way and didn’t vote. The difference between those two figures is less than 1% of the sample. In the bigger scheme of things, it just doesn’t matter.

From the point of view of political sociology, it’s vitally important to understand non-voters. And if I were going to pick any single ‘voter’ group for my research moving forward, I think that I could do much worse than to focus on the voluntarily self-disenfranchising.

But habitual non-voters are not going to have a decisive impact on the next general election.

Too few of them vote.