It is an article of faith for many on the British Left that measures to combat left wing antisemitism are in reality measures to combat Labour Party leader Jeremy Corbyn: attempts promoted by the fiendish ‘Israel Lobby’, and opposed by Jews. Yes, by Jews. You know the Jews I mean: maybe not the Jews you’ve actually met, but, as Chaminda Jayanetti put it, ‘the Good Jew[s] – the Perfect Jew[s]. The Manic Pixie Dream Jew[s]. The Jew[s] to be put on a placard as evidence of how Not All Jews support Israel.’ There’s a certain kind of Leftist who needs those Jews.

For a particularly clear example, let’s take the following discussion, which took place on Nick Ferrari’s LBC radio show on Tuesday 26 September 2017: the morning of the Labour Party Conference vote on whether to adopt the Jewish Labour Movement’s proposed amendment to the party’s shockingly weak rules on hate speech. The caller, who gave her name as ‘Angela’, came on air at 7.38:

Nick: Angela’s in Hackney. Are there problems regarding antisemitism in the Labour Party in your view? Good morning.

Angela: I’m a member of the Labour Party and, in my local group and, I believe, nationally, there are so many Jewish people who are members of the Labour Party, and they support Jeremy Corbyn, and they joined because they believe in socialism or equality, they’re anti-racist, they’re all working hard to bring Jeremy Corbyn into power, or Labour into power, I should say, and they don’t support this line that JLM is taking at all, Jewish Labour Movement, because effectively, what Jewish Labour Movement is —

Angela: — is a lobby group.

Nick: Excuse me, you’ve got the CAA as well.

Angela: Another Israel lobby group, you see all your calls so far, it’s all Israel, Israel.

Angela: I don’t know what Wes Streeting’s agenda is, but I can tell you that up and down the country, there are Jewish activists working for Labour to get into power, and they support Jeremy Corbyn, and they’re not playing the antisemitism, the the argument with the Jewish Labour Movement and the Campaign Against Antisemitism, their aim is to get rid of Jeremy Corbyn by any means and this uhm witch hunt that they’re pushing in the Labour Party about claims of antisemitism is all focused around Israel.

Angela: You have to ask him!

We have here two tropes, or rhetorical devices, that are commonly mobilised to rebut allegations of antisemitism: on the one hand, what David Hirsh has called the Livingstone Formulation — i.e. the implication that any complaint about antisemitism is in reality no more than a cloak-and-dagger attempt to protect Israel by hurting those who support Palestinians — and on the other hand, the conscription to one’s aid of an unseen multitude of Jews who say that other Jews are wrong.

All of this relies on age-old forms of anti-Jewish discourse: Christian antisemitism was often justified by reference to the supposed testimony of Jewish converts, and conspiracy theories about Jews who secretly manipulate politics for their own nefarious ends are the heart of that classic of antisemitism, The Protocols of the Learned Elders of Zion. Some things never change, and one of the things that doesn’t change is that the international conspiracy of the Jews explains everything, and that if there’s something that it doesn’t explain (Wes Streeting, for example) then that doesn’t matter because you only have to think a bit harder to find that really, it does. The reason you can’t have nice things, you see — nice things like a Jeremy Corbyn government, say — is that everyone you don’t like is in cahoots with the Jews. (I’m sure Angela would insist that her beef is with Israel, not with Jews — but substituting the Jewish state for Jewish people doesn’t really kosher the trope, you know.)

Still. Might not the assertion that there are ‘so many Jewish people’ who support Corbyn ‘up and down the country’ be literally true? It won’t necessarily help Angela’s case if it is, because opposing antisemitism and supporting Jeremy Corbyn are not mutually exclusive: with the exception of a very vocal segment of its activist base and some decidedly odd pressure groups such as Labour Party Marxists and the (anti-Zionist) Jewish Voice for Labour, the party largely came together around the JLM’s proposed rules changes, with support not only from Corbyn himself but also from the powerful pro-Corbyn organisation, Momentum. But I still think it’s worth trying to find out. How can we do that?

We can’t just ask people we know, because that will give us a biased sample (especially if we move in circles where people who don’t question Israel’s right to exist are routinely made to feel uncomfortable). Election results give us a clue, though it’s hard to pick out the signal from the noise. So, for a more reliable picture, we should take a look at the most recent wave of the British Election Study: a very large random sample survey that took place just after the General Election this June.

One of the questions in that survey invited people to express their liking of Jeremy Corbyn numerically, with 10 being the most positive response available and 0 the most negative. To begin with, we’ll compare the average answer given by people who gave their religion as Judaism to the average answers given by people who identified themselves with other religions, or with no religion at all. The British Election Study’s own weightings have been applied in order to make the survey respondents more representative of British society as a whole:

Well, that’s pretty stark. It looks as if Jews were less enthusiastically pro-Corbyn than members of any other religious group.

Now let’s take look at the distribution of ratings of Jeremy Corbyn among Jewish survey respondents. The height of the column above each rating tells us how many Jewish respondents to the survey gave him that rating. Again, these have been weighted to make survey respondents more representative of the population as a whole. The average Jewish opinion of Corbyn from the table above is indicated by the dashed red line: 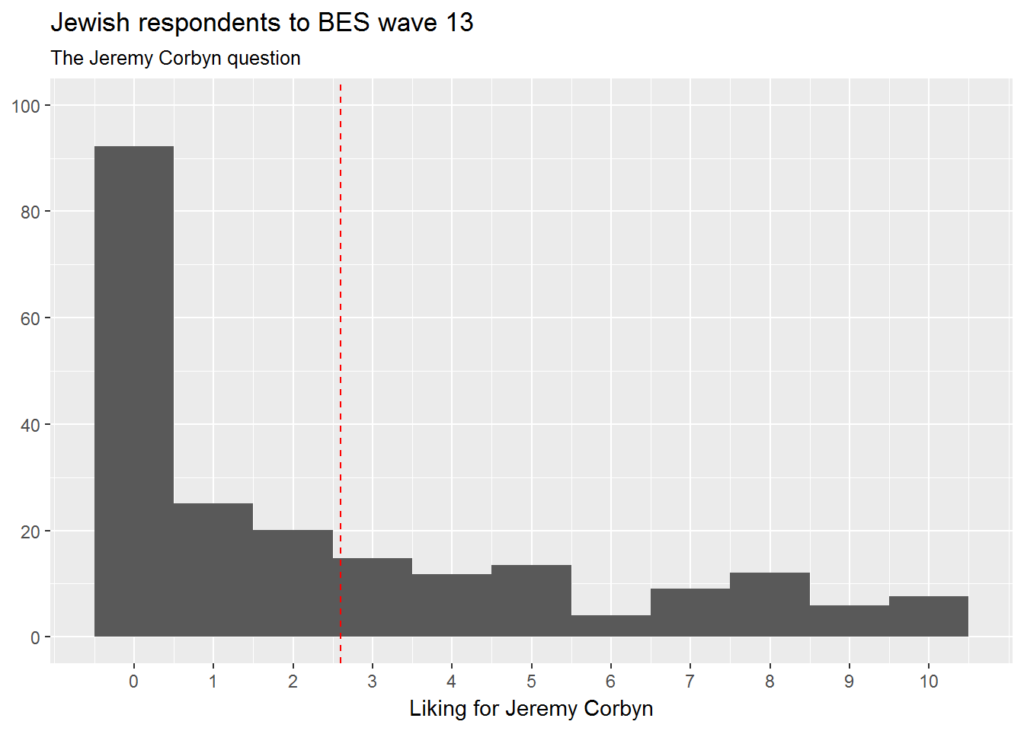 My goodness. Whichever way we look at it, Jeremy Corbyn obviously wasn’t flavour of the month, that month. Overall, 72.2% of Jewish respondents expressed a relatively negative opinion of Jeremy Corbyn by giving him a 4 or worse while just 17% expressed a relatively positive opinion by giving him a 6 or better. (By an interesting — although perhaps not entirely surprising — coincidence, 17% is also the proportion of respondents to a recent survey of British Jews who did not say that they think the Labour Party is ‘too tolerant of antisemitism among [its] MPs, members, and supporters’.)

The UK’s Jewish population is approximately 270000. Thus, we can assume that there were something in the region of 46000 British Jews who were somewhat positively disposed towards Jeremy Corbyn this June. That is not an inconsiderable number — but it is a clear minority of British Jews, and non-Jews have no right to forget about the rest.

So much for relative levels of like and dislike. What about the extremes? After weighting, only 3.3% of Jewish survey respondents gave him a 10, while 40.6% gave him a 0. This means that we should assume that something like 9000 British Jews really, really liked him — while 110000 (or roughly 12 times as many) really, really didn’t.

This is the context in which we should understand the claim that large numbers of Jews have been working for a Corbyn victory (or at least, for a victory for the Labour Party while its leader happens to be Jeremy Corbyn). There were probably thousands of Jews who thought very highly of him in June. But there were about a hundred thousand more whose feelings about him were exactly the reverse. So if you think that the number of Jews who love Jeremy is a strong argument, the trouble is that the far greater number of Jews who can’t stand him must be an even stronger one. (I continue to leave aside what ought to be the obvious point that it is perfectly possible to support Jeremy Corbyn without believing that attempts to combat antisemitism are part of a ‘Zionist’ plot against him.)

And to make matters worse, all that was in June. Right now, it’s September — at the end of a week in which Labour Party antisemitism has become so visibly extreme that the CEO of the UK Equality and Human Rights Commission officially stated that ‘the Labour Party needs to do more to establish that it is not a racist party.’

Oh, Labour — you can still, I think, be fixed, if you really want to be. But first, your leader will have to admit that a serious problem has (to put it rather charitably) emerged on his watch — and in his big speech on Wednesday, he didn’t even mention it. (Perhaps unsurprisingly, given past attempts to whitewash the problem.) One recent study unsurprisingly found that people with strong anti-Israel attitudes and beliefs (of whom there are many in the Labour Party, especially among Jeremy Corbyn’s supporters) tend also to hold antisemitic beliefs about Jewish people, while another found eight times more antisemitism among Labour Party officials than among representatives of any other British party. Tackling that is going to take more than just a rules change.